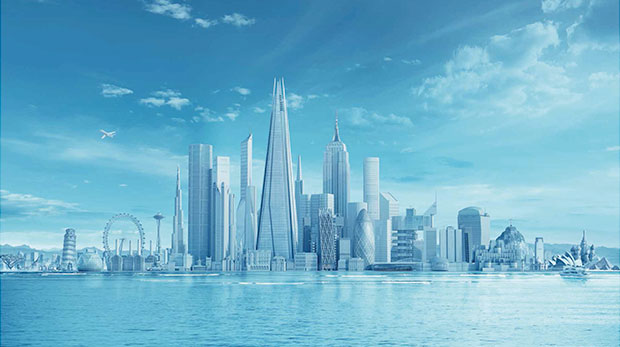 The front page of the 2014 Wealth Report from Knight & Frank, purveyors of penthouses to the insanely wealthy, depicts a city that will never be and yet already exists. The Shard nestles beside the Empire State building, the Burj Khalifa soars distantly in brasher newer borough, the Gherkin stands on the waterfront small but cheerily phallic amongst all the more self consciously sober buildings. Each building has been plucked from an iconic city, a global city known and trusted by consumers of great wealth and ability.

As a symbol of the power of global brands, the rise of the global city brand could not be more assertive. Ten cities stand out from the top tier of this increasingly crowded market and there are a whole legion of cities vying to join this elite group. Having lived and worked in London and New York, and having spent a lot of time in Singapore, Shanghai and Dubai I can tell you from personal experience they all have far more in common with one another than the countries they were built in.

London is increasingly disconnected from Britain. London thrives on global trade, it has the same GDP as Sweden, has a population of extraordinary diversity speaking 167 languages and can afford to decouple from the UK anytime it likes.

“Having been to Singapore,” he said in 2006, “and seen how successful it was I think anything short of a fully independent city-state is a lost opportunity, with its own foreign and defence policies thrown in.”

London has an excellent case for declaring U.D.I. It creates 22% of the UK’s GDP but has only 12% of the population with a disproportionately high taxation level and could justifiably claim it is being unfairly exploited. The current Mayor Boris Johnson, has begun to address the need for autonomy over fiscal policy to right this imbalance.

As with London, so with the other global city-states. Economically, demographically, culturally they are all different from and more successful than the countries that they inhabit.

But how did this happen?

The answer is stunningly simple. They have all emerged to become brands in their own right. Each city-state has a clear identify, a brand promise and an experience that is uniquely rewarding. For all their faults, and every brand has some failings, they are hugely satisfying places to live and work in.

For some this happened the old fashioned way, London, Paris, New York – all emerged over time to become global brands. It means they are complex brands, full of heritage and rich signifiers.

Newer cities have been planned to become power brands, Dubai being the most consciously crafted, creating a high tech cosmopolitan oasis where once there was only sand. Dubai has risen from fishing village to global hub as a deliberate policy, creating wealth from nothing but will power and concrete.

More and more cities are waking up to the need to become a global brand in order to attract the intelligence and wealth that the global economy creates. Where once cities sought iconic buildings to attract tourists, now they plan their infrastructures and environments to attract talent and wealth well aware that If they don’t become attractive brands in their own right, the 21st Century might just pass them by.

Branding has never been seen on this scale before.